How long does it take to recover after ACL reconstruction?

Many athletes are anxious to return to training and sport following an ACL reconstruction. Why is the ACL recovery period so long?

The reason for this is due to the biological changes which the graft will need to undergo in order to re-incorporate into the body. Once a graft is disconnected from the body, even for a short time, the cells within it undergo necrosis (i.e. die). The remaining collagen acts as a scaffold for the host to re-populate and re-incorporate.

Animal and human studies have demonstrated several phases of the healing process: 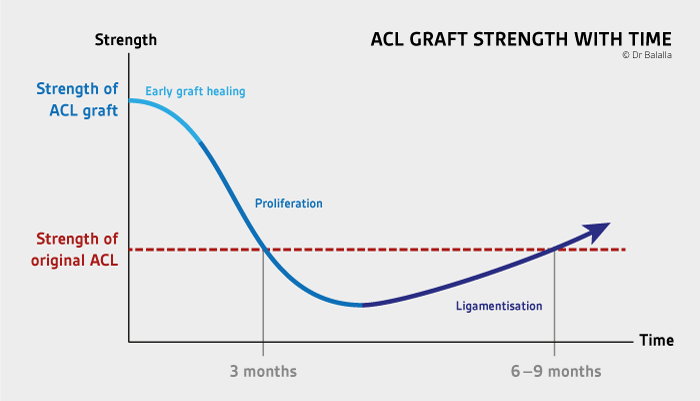 By around 3 months, patients often feel that the knee is very settled, and moving well. It is understandably tempting to return to sporting activity. However, this period is the beginning of the time when the graft is below the strength of the native ACL, and is associated with the risk of re-injury. Even if the graft doesn’t completely rupture, the graft can undergo micro-tears, leading to elongation of the graft and a suboptimal clinical result. Working with an experienced physiotherapist is essential.

The goals of physiotherapy following ACL reconstruction are initially to regain movement and reduce swelling and pain. Once this is achieved, the next phase is to rebuild strength and focus on muscle control. Straight-line exercise is used to build fitness. After around 4 months, more strenuous exercise is introduced, depending on the individual progress of the patient. Sports-specific drills may also be introduced. I usually allow training with your team at around 5-6 months, but no contact sport. Full return to sport begins at 9-12 months, but contingent on adequate muscle strength, control, and fitness. In situations where allograft has been used, or in a revision situation, I advise much slower progression.

Choosing the right time to return to sport involves many factors, including graft type, return of strength, and return of muscle control. Ultimately it can involve weighing up the risks of returning earlier, which many elite athletes may feel is worthwhile. Successful incorporation of the graft and ACL recovery is a biological process, much like the healing of a cut on the skin, over which the patient and the surgeon have limited ability to hasten.

Send us an email and we'll get back to you, asap.